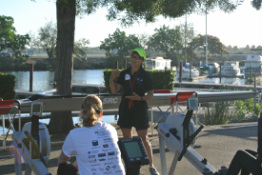 Pat Tirone began rowing in her early 50’s at Stockton Rowing Club.  After sweep rowing for a few years, she learned to scull from one of SRC’s coaches and founding members, Phoebe Storey.  She then went on to train at Craftsbury Sculling Center, Florida Rowing Center (with Gordon Hamilton and Marlene Royle) and trained for several years with Mark Wilson of All-American Rowing Camp (AARC).  Before she started coaching full time, she won numerous medals at regional regattas both during the sprint and head race seasons in her single scull.

In 2007 she began coaching, mentored by Mark Wilson in Tempe, Az, Petaluma, CA and Dallas, Texas and by other AARC coaches who conducted clinics on the west coast. She has completed USRowing’s Levels I, II, and III certifications.  She stays up–to-date by attending annual USRowing Coaching Conferences and other specialized coaching training clinics. At the beginning of her coaching career, she coached both competitive sweep and sculling for SRC as well as taught Learn-to-Rows sessions and basic as well as intermediate sculling. Since founding Delta Sculling Center in 2013, she has offered small group and private sculling instruction in Sacramento, Petaluma and at Craftsbury Sculling Camp in Vermont in addition to coaching all skill levels at Delta Sculling Center.  Through her work as a physical therapist, she has taught a variety of patients with disabilities to land row and scull.  Some of the movement impairments she has worked with include joint replacement, amputation, traumatic brain injury, head injury, quadriplegia and paraplegia. In 2018 USRowing awarded her the Isabel Bohn Award, given to an individual or organization achieving measurable success in expanding rowing opportunities for those with physical and intellectual disabilities.

Pat's approach to sculling/sweep instruction is rooted in her strong foundation in movement, beginning early in life as an amateur dancer, competitive swimmer and swimming coach.  Since college, she has been a yoga practitioner and now is a certified instructor of both yoga and Tai Chi for Health.   Her approach is also informed by more than 25 years of teaching in and administering adult education programs as well as her study and work as a physical therapist and university professor of human anatomy.  She is honored to work with rowers, particularly scullers who inspire her as they grow their “sculling wings.”  She believes that everyone can learn to scull and that it is her job to arrange for each person to learn successfully.  One of her favorite sayings is that “the water teaches” so she tries to measure out her instruction – enough guidance and enough silence for budding athletes to easily learn their new skills.